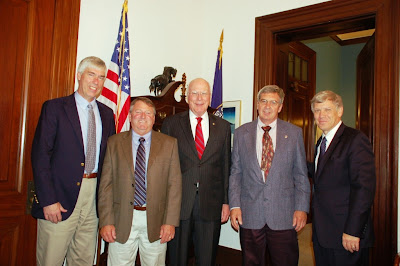 Our main message again this year was that we are meeting the needs of our customers and doing business as usual, notwithstanding the continuing downturn affecting many of our customers, especially in the dairy and timber industries. We are lending money; our financial results are good; we continue to pay patronage refunds; and the Farm Credit System has not needed any government assistance. This message was well received.

Both the House and Senate have passed legislation for financial services regulatory reform, and a conference committee is currently negotiating the differences between the two bills. For the most part the Farm Credit System is not affected by this reform. However, we voiced our concern that one provision in the Senate version, the so-called Volcker Rule, could potentially have an adverse effect on the cost of Farm Credit System debt as compared to other GSEs.

Other issues that we mentioned were estate taxes, farm labor and issues relating to how we can work better with the Farm Service Agency. We provided each office with a copy of the Northeast Dairy Farm Summary published last month.

We happened to be in Washington for the 28th Annual Capitol Hill Ice Cream Party, sponsored by the International Dairy Foods Association. It was very popular!